Are tires safe for dogs to chew on? It’s a question many dog owners have asked themselves, especially for those of us with dogs who will wreck any standard dog toy within ten minutes of getting their teeth on it! Tires are tough, durable, and dogs seem to love getting their teeth into them — providing them with hours of entertainment while owners can take a break, safe in the knowledge their dog is occupied.

Are they actually safe though? Not really — tires can contain a variety of toxins that can be damaging to your dog’s health.

Will Anything Happen To My Dogs If They Chew On Tires?

Likely, no. We’re always hearing stories about things that are potentially toxic to dogs — such as garlic, onions, chocolate — and they’re usually fine if they get their mouth on them, especially if it’s not in excess. The same goes for tires, so don’t panic if you’re just now reading this and you’ve let your dog get its mouth on a tire.

However, that doesn’t mean it’s wise to take the risk and it’s always better to be preventative. Large quantities of the toxins found in tires could prove damaging to your dog over time.

They may enter the stomach and even if they don’t, they can damage the teeth and gums.

What Toxins Are Found In Tires?

According to studies done by the EPA, tires have been found to contain toxins such as benzene, mercury, and arsenic. It’s obviously really bad if these toxins find their way into your dog’s insides!

Are There Other Risks?

Yes. Some dogs can bite through tires entirely and break off small pieces, meaning they’d actually consume the rubber itself. This means they could end up with a blockage, which can be potentially fatal.

If you think your dog has consumed any piece of a tire, keep an eye out for vomiting, diarrhea, lethargy, clear discomfort, or a loss of appetite, and see a veterinarian immediately if any of these things occur. However, rubber in itself isn’t toxic to dogs, so it will hopefully pass without incident.

You may think tires are too tough for dogs, but large and powerful canines with sharp teeth might just surprise you, especially if the tires are a little smaller — such as those on a motorcycle.

The other risk is that your dog may actually break a tooth on a tire. Dogs have been known to chew to the point of it not being good for them, as they may get fixated on the activity, and that can result in them actually breaking their teeth.

If this happens, you’ll definitely have to make a trip to the vet and dental isn’t cheap for anyone!

The last risk is actually to you. If your dog loves chewing on tires that are actually attached to things, you may not have noticed that they’ve managed to puncture it. You could end up paying for repairs to your vehicle or, worse, you might end up in an accident or stranded if you don’t actually notice the damage until it’s too late.

My Dog Loves Chewing On Tires Though!

If your dog loves this activity, you might be reluctant to take it away. We love to see our dogs happy, and that’s understandable. Despite this, it’s important to recognize that dogs don’t often know what’s good for them and if they were left to make their own decisions all of the time, they likely would have very short life spans!

You can, however, replicate the experience in a more controlled way.

There are safe tire toys that companies have made to replicate the experience of biting a tire — all without the toxins and risks! KONG, for example, has a tire toy available to buy online that’s made for super tough chewers and this company has a great reputation. 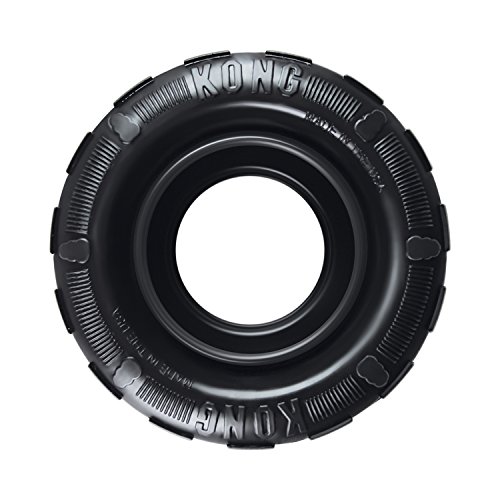 It doesn’t even have to be tire toys specifically. Many companies make toys for dogs that consider themselves super chewers, and chewing on them likely feels very similar to chewing on a tire.

Otherwise, if your dog is attracted to tires, you may need to practice management skills. Don’t leave your dog roaming unsupervised outside where they might turn to bite on the tire and practice a reliable recall and “leave it” command for when they’re off-leash. That way, you can always call them back from a potentially toxic tire and provide them with a safer outlet instead.

Best 10 Toys for Dogs with No Teeth